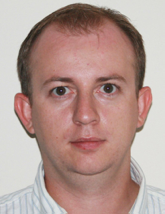 Roch-Philippe Charles studied biology at the University of Lausanne (UNIL) in the Department of Pharmacology and Toxicology. He obtained his PhD there under the direction of Dr. Edith Hummler and Prof. Bernard Rossier, studying the implication of ENaC and its activator CAP1/Prss8 during perinatal development. Then he moved to the Helen Diller Comprehensive Cancer Center at the University of California in San Francisco (UCSF). There, he joined Prof. Martin McMahon’s lab in his efforts to investigate in vivo the oncogenic effect of BRAFV600E mutation.
In January 2013, he joined the Institute for Biochemistry and Molecular Medicine of the University of Bern as NCCR-TransCure assistant professor. His aim inside the NCCR-TransCure network is, on one the hand, to bring in vivo approaches for validation of the drugs characterized by other TransCure groups in the context of cancer therapies, and on the other hand, study the implication of membrane transporters in mouse models of cancers.
The keyword defining the Charles lab is translational biology. The long-term goal of the lab is to translate novel approaches developed on benches in the lab into mice treatments in the vivarium, and hopefully human therapies.