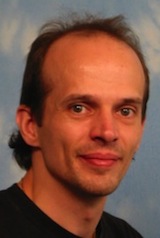 Theo Kluter is professor for electronics at the Bern University of Applied Sciences. He received his M.Sc. from the Technical University of Twente, the Netherlands, in 1996, and his Doctorate from the EPFL, Switzerland in 2010. From 1997 to 2002 he worked as design engineer in the start-up company Dedris Embedded Algorithms/Frontier Design/Adelante technologies in Tiel, the Netherlands. In 2002, he joined Agere Systems as ad-interim development team group leader in Utrecht, the Netherlands. During his time at Agere, he and his team developed the first demonstrator of multimedia streaming over Wifi using and defining the Quality of Service protocol. Out of these developments he was interested in continuing his research activity and joined  EPFL in Switzerland in 2003. Today, he teaches electronics at the Bern University of Applied Sciences and at EPFL. Currently, his main interest is re-configurable architectures and processor specialization.