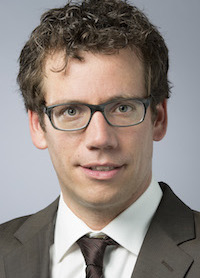 Tobias Nef was born in Zuckenriet (SG) in 1977. He studied electrical engineering at the ETH Lausanne where he graduated in 2002. He then joined the Sensory-Motor Systems Lab at the ETH Zurich as PhD Student. Under the direction of Robert Riener, he developed and evaluated the ARMin arm robot for the rehabilitation of stroke patients. After the PhD, he joined Joe Hidler's group at the National Rehabilitation Hospital in Washington D.C. with a fellowship of the Swiss National Science Foundation. His research focused on the control strategies for the ZeroG robotic device and for the ARMin robot. In 2009, he became Assistant Professor at the Department of Biomedical Engineering at the Catholic University of America in Washington D.C. Since 2010 he is Assistant Professor at the University of Bern and leading the ARTORG Gerontechnology and Rehabilitation Group. In 2014 he has been promoted to associate professor (Extraordinarius) for Gerontechnology and Rehabilitation. His work has been awarded several prizes, among them the ABB Research Award 2009, the Hans-Eggenberger Award 2008, the Swiss Technology Award 2006 and the humanTech Innovation Prize 2005.